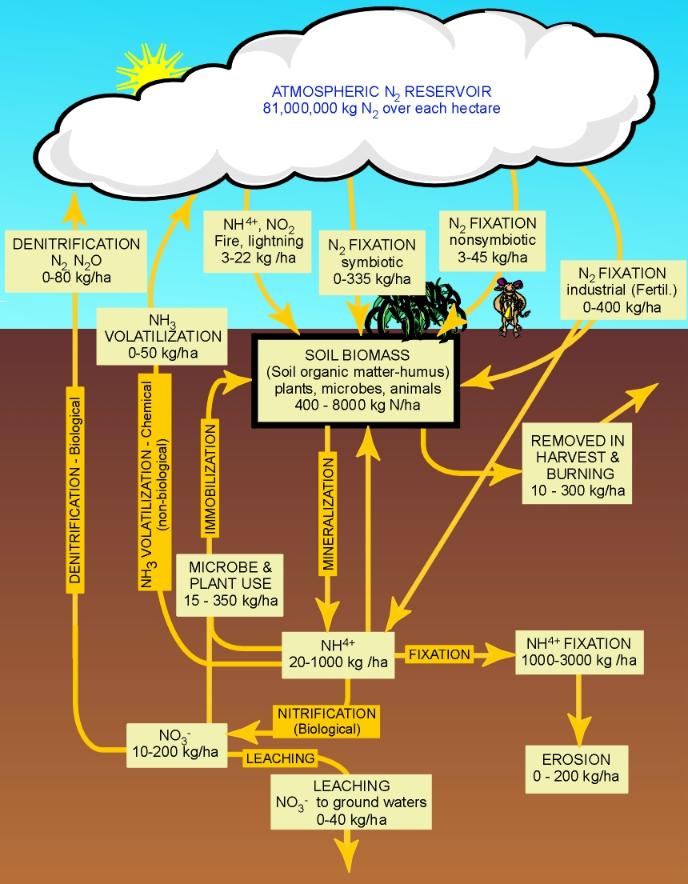 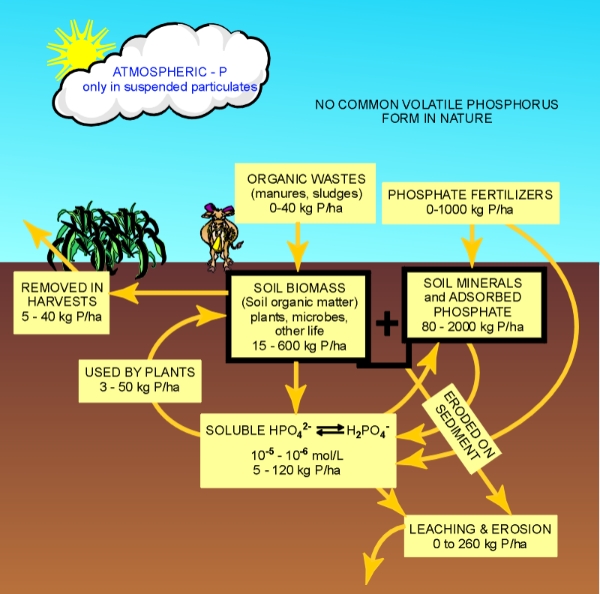 The CEC of a soil depends upon the amount and type of soil colloids present. The clay content, the type of clay minerals present, and the organic matter content determine a soil's CEC.

*Unit is centimole of charge per kilogram of colloid another common unit for expressing CEC is me/100g (milliequivalents/100 grams). Note that 1me/100g = 1cmolc /kg.

Kaolinite is the dominant clay mineral in soils of this region, but some soils contain significant amounts of montmorillonite, a clay mineral of the smectite group.

CEC for various soils: a typical range of CEC for soils in the state and the region is 3-5 me/100 g. See page 147 of text for a range of CEC for a variety of soils from various regions of the U. S. You may encounter a CEC expressed as "sum of the bases" (Ca+Mg+K+Na) or a CEC based on "sum of the bases and exchangeable acidity" (H+Al). For soils such as those in the Piedmont region, there is usually a large difference. Generally, CEC is not used directly to manage soils and their fertility. The effect of CEC and its significance in managing soils is incorporated into the management of pH and lime requirements. The larger the CEC the more buffering capacity a soil will have and the more lime that will be required to raise the soil pH by a specific amount, for example, from 5.5 to 6.5. By the same token soils with a large CEC will have more K supplying power for a given degree of K saturation. Following proven soil test methods and fertilizer recommendations is the best way to manage plant nutrient supplies.

Conversion of me/100 grams to pounds/acre and other facts relating to acreage:

These conversions are based on an estimate that the surface 6-inch layer of soil over the area of an acre weighs 2,000,000 pounds. The actual weight depends upon the soil bulk density which commonly varies from about 1.3 to 1.7 g/cc. For example, a cubic foot of water weighs 62.4 lbs. If the bulk density of a soil were 1.3 g/cc (1.3 times heavier than water) then the soil would weigh 62.4 x 1.3 or 81.1 lbs/cu. ft. on a dry weight basis. Soil properties such as clay content and gravimetric water content are always expressed on a soil dry-weight basis.

Other useful numbers to remember and examples of how to use them:

the weight of an acre-foot of soil with a bulk density of 1.47

Note differences in base saturation of kaolinite and bentonite over the pH range 5.5 to 6.5. Humic acid and illite have pH-base saturation relationships similar to bentonite.

The figure "Base Saturation" is based on data published in Soil Testing and Plant Analysis, Edited by Leo M. Walsh and James D. Beaton and published by the Soil Science Society of America, Madison, Wisconsin in 1973. The original data was developed by A. Mehlich and published in 1943.

Unless one knows some specific characteristics about a soil such as the dominant clay minerals, the amount of clay in the soil, and the amount of organic matter, soil pH will not tell how much is the lime requirement. The pH is a measure of the amount of hydrogen ion in the solution. As is true of all cationic species, acidic as well as bases, only a small amount of the total exchangeable ions are present in the soil solution at one time.

Soil test methods that have been developed to quickly measure exchangeable acidity must be relied upon to estimate the amount of lime required to raise the soil pH to a desired range.

For most elements only a very small fraction of that present in the soil is available to plants or other biological organisms. The soil solution, that is the water surrounding the soil particles which contains dissolved minerals and salts, typically contains only a few parts per million of the various elements. The natural abundance of elements in a surface soil is presented in Table 2.

Table 2. Elemental concentrations of surface soil from a location in the Piedmont of South Carolina; means of 33 samples.

Nutrients are distributed between solid and liquid or water phases. The major portion of the various elements is part of the structure of amorphous and crystalline minerals, clay minerals, and organic matter. They are not available to plants or microorganisms except through dissolution and weathering processes. Exchangeable ions are held close to the colloidal surfaces. They are not free to move about as are ions or solutes in the soil solution but they can be replaced as a result of an ion-exchange reaction.

The concentration of nutrients in the soil solution is constantly changing as a result of many reactions proceeding simultaneously, including growth cycles of soil microorganisms, decomposition of crop residues, dissolution and precipitation of solid phases, uptake of ions by plant roots, respiration of plant roots and release of metabolic products such as carbon dioxide and organic acids, and the cycling of ions between the various phases as a result of these reactions.

Measurement of the amount of nutrients in the soil which are available to plants has been the subject of extensive research over the past 100 years. Most estimates are based on extraction of the soil with various solutions including acids, salts, and chelating agents. The amounts extracted are then compared with the amount which can be taken up by plants. The plant is the authority on what is available. Some plants are able to extract more nutrients from the soil than other plants.

Supply of Nutrients to Plant Roots

There are three main processes by which nutrients are supplied to plant roots:

1. Mass flow of soil solution to the plant root as a result of water uptake.

2. Diffusion of ions from solid phases or regions of high concentration towards the plant root as concentrations become depleted due to nutrient absorption.

3. Root interception as a result of the root growth and occupying more space.

The table below shows the relative amounts of several nutrients supplied to corn roots by the three processes.

A. General mechanisms that affect the availability of various elements and relevant terms.

Precipitation-dissolution: when dissolved substances form solids (solid phases) and drop out of solution, the process is called "precipitation"; it is not the same as adsorption; dissolution is the opposite process whereby solids go into the solution phase and become "solutes".

Fixation: elements or certain ions such as NH4 become physically and chemically bound in a non-exchangeable form. An example is the entrapment of potassium between silica layers of clay minerals. Some clays also fix ammonium in the same way. Phosphorus can also become "fixed" in unavailable forms but the mechanism is different than ammonium or potassium fixation. Phosphorus is fixed by being bound chemically to iron and aluminum compounds.

Denitrification: biochemical reduction of nitrate or nitrite to gaseous nitrogen

Mineralization: conversion of an organic form of an element into an inorganic form.

The decomposition of crop residues is usually limited by the C/N ratio of the residue as well as environmental conditions. Soil microorganisms have the first choice of available nitrogen. Higher plants get what is leftover. Alfalfa will decompose more quickly in soil than corn stalks because of its higher nitrogen content (lower C/N ratio).

Nitrate, being an anion, is the most mobile form of N in soil; it moves within the water as water percolates through soil and is easily lost through this leaching process. Ammonium and ammonia forms are cationic and held by cation exchange sites. However, ammonium and ammonia forms are converted to nitrate by soil microorganisms. The reaction is fast in warm moist soils. The reaction rate becomes slower as the soil becomes more acidic. From spring through fall most ammonium fertilizer is converted to nitrate within a few days to a week or two. Urea nitrogen is hydrolyzed to ammonium nitrogen by a soil enzyme and then quickly converted to nitrate provided conditions are right.

Phosphorus is strongly held by soil clays and iron and aluminum compounds associated with soil clays; also, phosphorus forms very sparingly soluble compounds, precipitates, in soil. These reactions proceed rapidly after fertilizer is applied. Most phosphorus in soil is precipitated, fixed, or adsorbed. These solid phases form phosphate reserves that can replenish the soil solution when phosphorus is taken up by plants, but the reaction is slow. Only small amounts of phosphorus are present in the soil solution. Because of these reactions with soil, P is very immobile, not subject to significant leaching losses. However, P is readily lost through erosion of surface soil and the associated P.

Use a textural triangle to determine textural classes of soil if given the percent of two of the soil separates
Figure 1 shows a textural triangle. The bottom of the triangle is labeled sand, the left side silt, and the right side clay. Each side is divided 100 segments. If we know the percentage of sand, silt, and clay in the soil, we can determine its texture. For example, if a soil is 40% sand, 30% silt, and 30% clay, the texture is clay loam.

Note: To determine the texture, lines from the sides must be extended in the correct direction. The triangle is equilateral i.e., all angles are 60 degrees. Proceed as follows:

clay extend line horizontal from the % clay
i.e., parallel with side labeled sand

Mineral soil material is defined by exclusion from either of these two requirements that define organic soils:
1. Organic soil has more than 20 percent organic carbon (about 35 percent humus) if it is never saturated with water more than a few days.

2. Organic soil has water saturation periods (unless drained by people) and has:

Chelates complex organic molecules used to maintain the plant availability of micronutrients.
Chelates prevent the micronutrient cation from interacting with the soil and forming insoluble compounds with soil constituents.

Effectiveness of the chelate is related to the stability of the chelate at different pH levels. Chelates should be chosen dependent on the soil pH. For example:

EDDHA chelates Fe over a pH range of 4 9

Chelates are generally more expensive than inorganic sources. Applications should be as near the point of crop demand as possible.

Inorganic sources and chelates are equally effective for foliar applications.

Back to Top of Page

The pH Defined
Soil pH is the negative logarithm of the active hydrogen ion (H+) concentration in solution. When water (HOH) ionizes to H+ and OH- (a neutral solution), both H+ and OH- are in concentrations of 10-7 mole* per liter. The [ ] = concentration.

Thus, the negative logarithm of [H+] is 7, or PH 7. When the H+ concentration is greater (more acidic), such as 10-4 mole per liter, the pH is lower (e.g., pH 4). In basic solution the OH concentration exceeds the H+ concentration. The product of the H+ and OH- concentrations equals 10-14 mole per liter. When H+ is 10-5, OH- is 10-9, for example. (The weight and volume units in chemistry are always expressed in the centimeter- gram-second system, and conversions to the U.S. units are not applicable here.)

"A mole is one molecular weight of ion or of the molecule. 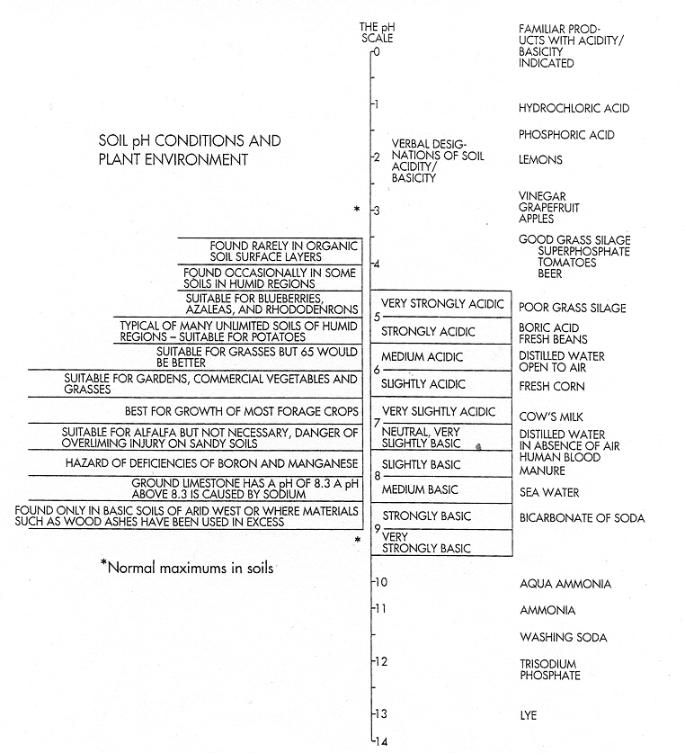 FIGURE 5-8 The entire pH scale ranges from 0 to 14, but soils under field conditions vary between pH 3.5 and 10.0. Few soils have pHs outside this range. in general, most plants are best suited to a pH of 5.5 on organic soils and a pH of 6.5 on mineral soils, (Source: Adapted from Winston A. Way, "The Whys and Hows of Liming," University of Vermont Brieflet 997, 1968.)